Let’s start with Bumbu Jawa itself. The restaurant is located on the Wagenstraat, on a corner. It’s hard to miss, really! Beforehand, there was a Chinese restaurant there. Natalia often had dinner there with her family. They often chatted with the restaurant’s owner, who one day said he was going to stop managing the restaurant. Jokingly, he asked if Natalia wasn’t interested in taking over. That joke became reality!

Natalia likes doing interior design. Almost everything you see in Bumbu Jawa is designed by Natalia herself. Inside, there are a lot of wood and green accents, creating a unique atmosphere perfectly representing the Indonesian kitchen. Besides, the restaurant’s name. Bumbu Jawa means spices from Java. Of course, a lot of hard work went into the place before it opened its doors.

After Natalia’s parents were married, they took over the restaurant from her grandparents, who started to enjoy their retirement. The restaurant is called Tjendrawasih, and is still open today, in Rijswijk (if you happen to be in the neighborhood!). Natalia grew up there but wasn’t always working in the restaurant. She did help out occasionally and worked for a few summers, but she didn’t necessarily see herself living the restaurant life.

Life had different plans, though

After Natalia established Bumbu Jawa with the help of her family, she decided to manage the restaurant herself after all. On November 4th, 2019, Natalia’s birthday, the restaurant opened its doors for the very first time. Not long after, though, the corona pandemic started. Now, in 2021, they have been properly opened for about six months. 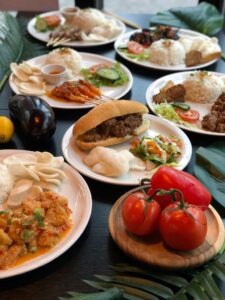 Natalia tells us: “Bumbu Jawa has a very different target audience than my parents’ restaurant. They already have so many people who know them well, but we don’t just yet. That’s why we focus a lot on presentation and aesthetics. We try to make our dishes Instagram-worthy by carefully arranging the plates. Besides, we also have Indonesian drinks to cool down or to warm up! There aren’t that many people here who know Indonesian drinks, but they are there! They’re perfect for takeaway too, a great counterpart for bubble tea that’s already readily available!”

Satay kambing is a favorite of almost all Bumbu Jawa’s guests. It’s mutton. Even those who don’t usually like eating mutton, love this dish, because the meat is so tender.

There’s also the Bumbu Jawa dish, which includes two types of meat and two vegetables. A lot of people already know this dish, and love it! There are also several rice dishes, because a lot of people expect to find this on the menu of an Indonesian restaurant.

And don’t forget the drinks! No need to limit yourself to a glass of cola or a bottle of sparkling water. Experience the Indonesian kitchen, at Bumbu Jawa, in Chinatown! 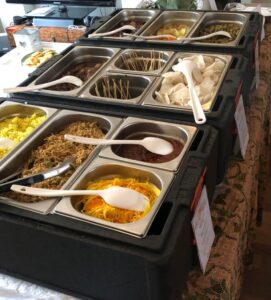 Then finally, Bumbu Jawa also does catering! How? Find it on their website: www.bumbujawa.nl.

This article is part of ‘Chinatown Chats’ – stories of people who have a connection to Chinatown The Hague. Do you have a story to share? Let us know via the contact form on our website or send us a DM on Facebook or Instagram!