Chinese festivals of fall and winter 2020

Even though this year, we can’t exactly go out to celebrate and experience China’s festivals ourselves. However, having a quick read and overview of what’s coming can’t be a bad idea!

Usually, these festivals are celebrated around the globe. Not just in China, but also Chinatowns around the world prepare for parties and celebrations. So does Chinatown The Hague, usually. Remember the beginning of 2020? It was quite a party!

We’re kicking this list off with a rather unfamiliar day to most people outside of China. September 28th is Confucius’ birthday. He was one of the most famous philosophers of Ancient China. Just take this fact, the organization that promotes the Chinese language outside of China is named after him: the Confucius Institute.

Confucius was extremely important in Chinese history. He had many followers and many of his wise quotes have been written down. One of those is 一所不欲，勿施於人。For non-Chinese speakers it may be hard to imagine, but these eight characters depict a saying that also exists in English. “Do not do to others what you do not want to be done to yourself.” 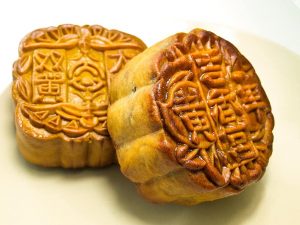 The Mid-Autumn Festival takes place during the full moon in the eighth moon month (that’s the 15th day) of the Chinese yearly calendar. It marks the first day of harvest. Lanterns are hung up everywhere and everyone’s out eating Traditional cakes. These are conveniently named mooncakes. Usually, they are quite small but be careful. They’re quite heavy on the stomach.

Mooncakes can be sweet, and more often than not there’s an entire egg yolk in the middle. You can purchase them in Chinese supermarkets (so also in The Hague Chinatown’s!). Buy one and try it. Small bite first, otherwise you won’t be able to eat dinner (or eat your cake after dinner).

Around National Day, everyone in China is off work for three days. If any of these days cover a weekend day, they are shifted so that the Chinese have a 5-day straight holiday.

On this day, celebrated on the ninth day of the ninth month, people take their kites up to higher areas and fly them, to appease the spirits. Flying one’s kite comes from the story of Huan Jing, who lived during the Han-dynasty. He was told that he had to move to higher grounds to protect himself from floods that would otherwise take him.

From a very old tradition, we jump right into a ‘new’ festival: Singles’ Day. Singles’ Day is a thing since the nineties, started by a group of students from Nanjing University. This day is celebrated on 11-11, as this date contains four ‘singles’ (ones).

Today’s tradition is that all single people buy themselves presents on Singles’ Day.

You can compare single’s day with Valentine’s day (even though there’s also a Chinese Valentine’s Day), as it’s a popular date on which people declare to each other their love or propose marriage.

Since 2014 there is Nanjing Massacre Memorial Day, to remember those who died in 1937 when Japan invaded Nanjing (China’s former capital). In Nanjing itself there is a large museum where they keep old documents, clothes, weapons, and objects owned by victims. If you ever find yourself in Nanjing, check it out!