The only constant in Chinatown is change – Janey’s story

A lot has changed in Chinatown between 2003 and 2021. Janey knows all about it! Having moved to the Netherlands from Malaysia, she frequently visits Chinatown the Hague.

Her main goal? The Chinese grocery store on the Gedempte Burgwal: Wah Nam Hong, as she is longing for some Asian groceries that she missed from her hometown. 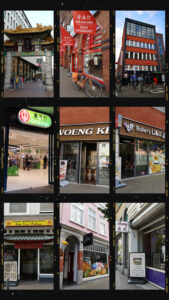 Janey is a very special person. Bubbly, vibrant, and loves to tell stories in an amazing way – she remembers more about Chinatown than we are ever going to know! Janey knows almost precisely the history of every location in Chinatown. She can tell you the stores that were there and how many times they’ve changed.

That does bring us to her main observation of Chinatown the Hague: it changes. A lot. More than Chinatown Amsterdam. We share her observation. About once a year, we walk through the streets to update our address list, and every time there are at least five changes to the previous list. Chinatown is a place of change, not only in the stores that are there but also in culture.

As you may have read in a previous article we posted (the guest article comparing Chinatown Amsterdam and Chinatown the Hague), Chinatown the Hague houses a lot of Mandarin speakers. This used to be different. Back in 2003 and earlier, Janey says, there were in fact quite a lot of people from Hong Kong coming to the Netherlands. As people in Hong Kong speak mainly Cantonese, the working language of Chinatown was also Cantonese. Naturally, the stores in Chinatown mostly followed the cultural identity of their owners.

A few years later, however, the flow of people from Mainland China increased. With that, more Mandarin speakers came to live, study, and work in Chinatown. However, the cultural identity of the stores they owned no longer reflected their origins. As Janey heard people put it: “A Japanese sushi or ramen restaurant may now be owned by a Chinese owner, rather than a Japanese person.”

According to Janey, this change also inflicted a change on the community. These days, she feels, Chinatown the Hague is less of a close-knit community than it used to be. “It’s because not everyone can mingle so easily anymore, with its constant changes. See, I speak Cantonese, I speak a little Mandarin to get by but not enough to have a complete conversation with the people working and living in Chinatown now. This is an example of what is the case for more people. Now there are several different groups.”

Janey’s a foodie, if you hadn’t noticed it yet. She loves ramen and has been to Düsseldorf many times to eat delicious Japanese food. For those who don’t know, Düsseldorf houses the largest Japanese immigrant community in all of Western Europe. The city is famous for its ‘Japantown’. Culturally, Düsseldorf’s Japantown and The Hague’s Chinatown are totally different. Janey talked to some restaurant owners there, and they told her that Düsseldorf’s Japanese restaurants use more authentic ingredients, whereas in Chinatown The Hague, the ingredients are less authentic. “It changes the taste,” Janey says. “The Hague could use some additional authentically Asian flavors, as some foodies really hunt for it and could tell the difference.”

Then… If people are foodies like you, where should they go?

“Always go to a restaurant where many local Asian people are sitting. Then, you probably know that the food must be good and fresh. That being said, everyone is entitled to their own judgment concerning the taste and quality of food. Restaurants that I frequently visit are Full Moon City, Full Moon Express, Woeng Kee, and Kee Lun Palace. Kee Lun Palace has been in Chinatown for quite some time, it was even here in 2003 when I visited for the first time!”

“It’s also great that there are now a bit more of Asian street food stores or kiosks in Chinatown The Hague. It is something that the younger people can enjoy. For them, a supermarket is just not enough, it is where they can buy Asian groceries but not for hanging out.  For example, there’s Sisi Bubble Tea, which is trendy and caters to their tastes. It’s great that this way, Chinatown will also attract a younger public. However, it would be great if there are more diverse Asian shops or cafes in Chinatown that can attract customers or visitors to hang out more often.  The food places – except for dim sum restaurants, those are with bigger spaces – are a bit small and it is not comfortable to sit for a long time. Even with the dim sum restaurants, once you’re done eating, you get the impression that the staff kind of wants to give your table to another person, but I just want to snack leisurely, enjoying my food and talk to my friend!” Somehow feeling a bit uneasy.

“Yes, and finally I would want to say that I hope Chinatown The Hague will get more happenings and events that attract more visitors throughout the year. People who are real foodies like me will really surf on the internet and be on the lookout for food reviews, food posts, and go to taste the food in the restaurants. It’s fun to share food stories of restaurants on Instagram as well, as it will also come to the attention of people who are not so invested in looking for a great new place on their own, but curious enough to look at the food posts, perhaps read a few lines and might go and try it themselves later. It’s good to attract everyone who enjoys good food and wants to have a nice day out in Chinatown!”

Thank you so much, Janey! We hope to hear more from you in the future!

This article is part of ‘Chinatown Chats’ – stories of people who have a connection to Chinatown The Hague. Do you have a story to share? Let us know via the contact form on our website or send us a DM on Facebook or Instagram!